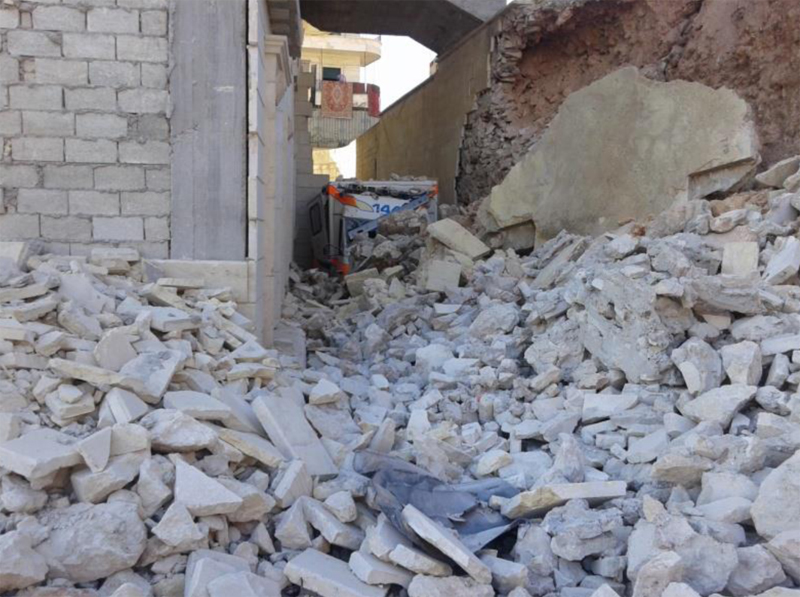 Washington, DC (Jan. 5, 2016) — On Christmas Day 2015, three hospitals in Aleppo were hit by missiles with one of the hospitals struck again the next day by barrel bombs. At around 9:30 p.m. on Dec. 25, Syria Relief and Development (SRD)’s Baghdad field hospital in Aleppo was attacked by two air-to-surface missiles presumed to have been dropped by Russian jets. The attack resulted in the death of one medical staff member and injuries to three others along with the destruction of three ambulances and six cars belonging to staff members.

In the village of Azaz, Aleppo, two hospitals were struck on December 25 by multiple air-to-surface missiles launched from fixed-wings military jets. Missiles hit the vicinity of Syria Charity’s maternal and neonatal hospital and the Physicians Across

Continent’s national hospital. The attacks caused enormous destruction to the infrastructure in both facilities including the pediatric, neonatal and maternity wards. Six newborns in incubators in one of the neonatal units had to be all evacuated in a rush. At least 14 civilians were killed in nearby attacks, and 13 vehicles belonging to hospital staff were also destroyed in attacks.

The following day, on December 26, the Baghdad hospital in Aleppo was targeted again by two barrel bombs dropped directly on its roof, leading to massive structural damages and causing staff and patients in fear for their lives. The hospital is now out of operation in a region that is in dire need of proper medical establishments. It is the fifth time this hospital has been attacked since it was opened.

Attacks on civilians, medical personnel, or medical facilities constitute grave violations of international humanitarian law. In 2015, there have been over 100 attacks on medical facilities. Syria Relief & Development, Physicians Across Continents, and the Syrian American Medical Society call for the UN Security Council to act with urgency to enforce its own resolutions, particularly UNSC Resolution 2139 calling for an end to attacks on civilians and respect for medical neutrality.