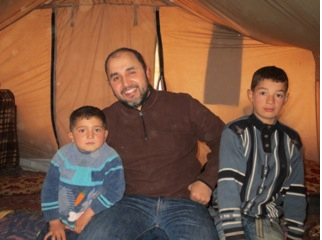 It was already 8:30 p.m., hours after sunset, when Ahmad and I crossed the border into Syria by foot through the tahreeb–illegal–side amid darkness headed to Qah, a refugee camp in northern Idlib. Our goal was to distribute winter kits the next day in the southern Idlib where many refugees who fled Hama are staying. But fighting in the area has made it unsafe for drivers to travel there so we decided to drop the winter kits off at a warehouse near Qah and deliver the kits when the situation is safer.

Just after we crossed the border, Ahmad, who was a mechanical engineer before the revolution began, recognized a Qah patron who offered to give us a ride to the camp where Ahmad’s brother, Mohamad, and his family have taken shelter. We traveled through rough terrain and bone-chilling cold to arrive at Qah where we walked through muddy paths along tents to reach the only one properly lit, Mohamad’s tent, affectionately dubbed by Ahmad as “The Five-Star Tent.”

The tent had a partition at the entrance that the family used as a kitchen where they cooked food, washed clothes and bathed the children.

Mohamad’s two daughters, three sons and wife were surprised to have a visitor. And I was surprised at seeing their red eyes and hearing their coughs, caused by smoke rising from the sobya (heating furnace) that they fueled with green olive-tree branches and some diesel.

The youngest of the children was called “penguin” by his siblings due to a penguin-like walk caused by a skin condition that developed between his legs from remaining in urine-soaked pants. I asked him where the restrooms were and he took me outside and pointed in the direction of a line of more than 30 people waiting for one of five toilets, three of which were not working. I found myself becoming teary-eyed thinking of how all of the camp’s refugees have difficulty in accessing even the most basic of necessities.

Back inside the tent, the children were excited and laughing hysterically at my silly jokes. “I haven’t seen them laugh like this since we walked into this prison,” Mohamad’s wife told me. They laughed because kids need to laugh, I thought.

After tea we all went to sleep. I watched the boys pile on top of their dad for warmth, or maybe just to feel safe again.