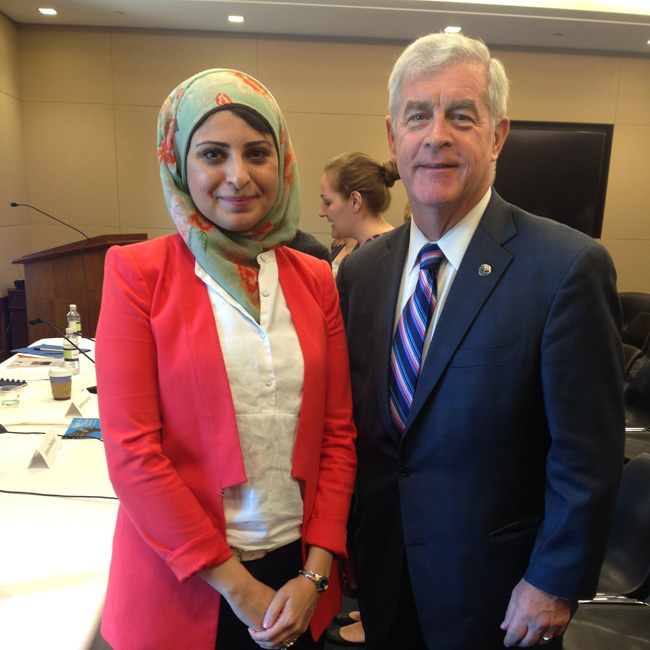 SRD Co-Founder Jomana Qaddour with William Sweeney, President and CEO of the International Foundation for Electoral Systems which co-hosted the event

On Thursday, July 23, SRD co-founder Jomana Qaddour served on the inaugural panel of Capitol Hill’s Women, Peace, and Security breakfast series, hosted by Congresswoman Sheila Jackson Lee and the International Foundation for Electoral Systems (IFES). Along with fellow panelists Julie L. Arostegui, the Women, Peace & Security Policy Director at the Women’s Action for New Direction, and Kathleen Kuehnast, the Director of Gender and Peace-building at the United States Institute of Peace Center for Governance, Law and Society, Jomana discussed the wide range of obstacles to bringing women to the peace table, where women are historically and systematically marginalized yet remain crucial to bringing about peace, stability, and equality in conflicted countries.

Ms. Arostegui and Ms. Kuehnast discussed the political and governmental histories of engaging women in conflict resolution and peace processes. In particular, they referenced the “turning point” of Hillary Clinton’s 1995 Beijing declaration that “women’s rights are human rights and human rights are women’s rights” and the UN Security Council Resolution 1325 on the impact of conflict on women. In keeping with their empowering message of overcoming institutional paradoxes, cultural expectations, and age-old discrimination, Jomana provided a human and a humanitarian perspective to the issue. Sharing the stories of countless women who have faced everything from domestic violence and sexual assault to under-representation in political councils and limited means for education, Jomana emphasized the inherent value, talent, and power of women that must be respected and utilized in order for Syrian society to rebuild itself.

As she explained the necessity of including both women and men in the gender equality discussion and the responsibility of men to create opportunities for women to succeed and break down barriers, Jomana stressed, “I owe a huge thanks to my father.” Despite the immense difficulties facing women in Syria, Jomana insisted that “as a Syrian-American, it is my job to take the message from Syrians and relay them here.” Concluding the panel, Congresswoman Jackson Lee echoed Jomana’s sentiments and applauded the work that SRD does in a poignant remark that “no one should be idle in this very different and unique time in this world.”