In late February, stories broke in major news sources around the world that Syrian women and girls were being sexually exploited by men who should have been delivering humanitarian aid to them. While devastating, the news wasn’t surprising given that Syria’s war has been uprooting and pillaging the most vulnerable members of its society since 2011.

It was March 2011 when war broke out in Syria, nearly 7 years ago. It was clear within a matter of months that women were going to suffer the most: the war had already created widows and orphans out of many women and children. And reports were already being released documenting the physical and sexual violence encountered by women and children. Women who sought refuge outside of Syria didn’t fare much better: they were often subjected to sexual harassment, even while trying to find gainful employment to care for their children.

It may have been the effect the war was beginning to have on women that first indicated the tremendous need for humanitarian aid both inside Syria and for refugees in neighboring countries. Humanitarian organizations like Syria Relief and Development (SRD) began implementing their earliest programs addressing the rapidly increasing number and needs of women and children who were feeling marginalized both in Syrian civil society and as refugees in neighboring countries. 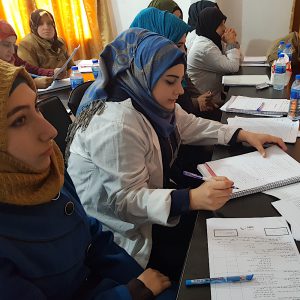 Between 2011 and 2012, SRD implemented food and refugee medical programs, delivering aid to those who needed it most with target beneficiaries being widows and orphans. Soon we added medical programs inside Syria that provided both Maternal and Children’s Health services as well as Sexual and Reproductive Health to women and girls. To complement the physical health components, SRD implemented women’s protection and empowerment programming that included sexual and gender-based violence (SGBV) prevention training for men and boys.  And we also implemented 3 Community Training & Empowerment Centers in Northern Syria that became a central hub for women interested in education, training, and psychosocial support. Many of the women who attend the centers are their families’ sole providers. The training and education they receive allow them greater opportunities in seeking employment.

This International Women’s Day, when so many women worldwide are still feeling the effects of gender-marginalization and SGBV, SRD commits to continue putting the fight for Syrian women’s rights and empowerment at the forefront of our programs helping Syrians in need. To date, we’ve helped nearly 500,000 women directly through our programs. But our ultimate goal is that the reverberations of educating society on women’s rights helps even more women than we can ever count.