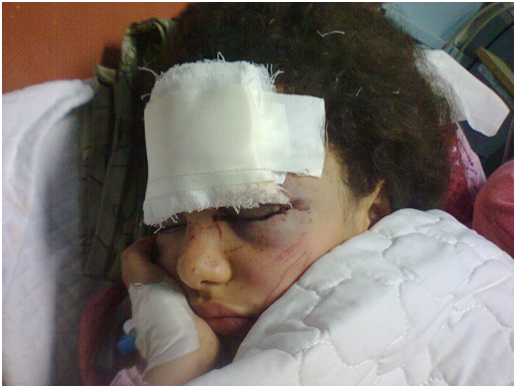 At the Syria Relief and Development (SRD) wing of Akilah Hospital in Jordan, there is a little girl from Daraa, Syria who suffers from the atrocities inflicted upon her. This is her heartbreaking story, written by Noor Alyaqeen.

Isn’t it time for the earth to tremble from anger at the sound of killing and destroying? For the sky to scream in the face of those whose brutality is laid on all creatures of the universe? Isn’t it time for humanity to be demolished when the country’s dirt is drenched with the warm blood of the children, mixed with purity and innocence which has no fault except being born over the land of beloved Syria?

The sun was then gleaming with pride across the distant horizon in the middle of the afternoon, sending tufts of shimmering rays suggesting to every lover of this country that the promise of salvation from hatred and injustice was almost here, announcing the approach of the spring where new flowers arise.

Maria carried her small pampered companion to the bathtub inside her home which lies in one of the villages of Daraa; that friend was not a person, but rather her smooth soft doll which she happily bathed every day. It became her rosy world from which she derived her elegant dreams and from entering this magical place, she learned the spirit of femininity.

What was wavering between tenderness and innocence was violently shaken following the collision of heavy shells in all corners of her home, and the ceilings fell right before her frightened eyes, which no longer saw anything besides pain and heartache.

When her body was crushed by the collapsed ceiling in the bathtub along with her companion, her surroundings became a coffin making her lose consciousness from both the pain and horror of the situation.

After a few minutes passed, Maria’s father cried bitterly over little Maria before he took off like a bolt of lightning searching for her in the house, drowning in a nightmare of loss. In the darkness of their home, it was only the beating of her longing heart which led him to her. He raised the debris off of her body, where she was gripping her doll amid the stones and a pool of blood.

He hugged his child and a mixture of panic, fear, and pain permeated every inhalation and exhalation that touched his strained breath as he took her to the only hospital in that village which defied injustice and humiliation. For this defiance, its punishment was the destruction of every brick which was built by the people of the village over the children of this same village who shook the thrones of tyrants with their innocent smiles.

Doctors provided urgent care for the unconscious child with their first aid supplies on hand. Clinical and radiological tests were performed and indicated a brain hemorrhage that needed to be monitored in the intensive care unit; in addition to that she had several fractures, primarily in her head and neck.

After only a few hours, a physician of noble character carried Maria from her hospital bed to the rear door of the facility, accompanied by her father, out of protection for them from the group of murderers who arrived at the hospital searching for a so-called “terrorist,” who had barely surpassed twelve years of her life.

The night sympathized with this small family showing them affection in spite of its cruel coldness and surrounded Maria and her parents with a darkness allowing them to escape from the village and cross the border to a neighboring country. This enabled them to continue treatment for Maria safely away from the hatred and treachery, leaving her doll in pieces and soaked with her crimson blood, to be a witness to the atrocities of the Mongol era, for all eternity.

Maria entered a hospital emergency room with edema, severe facial swelling, severe pain in the head and neck as a result of broken vertebrae in her neck, an inflamed wound in the scalp, and severe bruising to the face. More importantly, she suffered from multiple seizures during the day. She was released from the hospital she was staying at due to a lack of adequate funding to complete the treatment.

Her family arrived at Syria Relief and Development’s medical wing in Akilah Hospital. Little Maria was admitted to Akilah Hospital and provided with treatment under Syria Relief and Development’s supervision. Special attention was paid to Maria who, along with her family, had been subjected to physical and psychological trauma that will be difficult to forget.

Maria’s wounds, bruises, and edema of the face and neck as well as the convulsions she suffered from were treated in response to the provision of neurological and surgical consultations. Maria is currently in stable physical and mental condition.