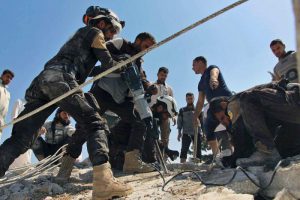 Washington, DC (September 27, 2017) — Syria Relief and Development (SRD) calls for action to protect civilians who are being targeted by the ongoing violent aerial attacks on Idlib and Hama being carried out in the past two weeks. The airstrikes have targeted civilian infrastructure, including healthcare facilities and schools. At least 37 civilians have been killed, according to some reports, including 12 children.
At least five hospitals were targeted over two weeks. According to the International Committee of the Red Cross in Syria, “The damage to Sham Hospital in rural Idlib leaves over half-a-million people without access to medical care”. Idlib province was declared a de-escalation zone back in May and yet the brutality continues. The Syrian Observatory for Human Rights said it was the highest civilian death toll in Idlib since the region was designated as one of Syria’s de-escalation zones.
The towns and villages in the areas of Aqiribat and Sa’an in eastern rural Hama have recently been subject to intensifying airstrikes, which have further aggravated the poor living conditions for civilians. The bombardment is causing many causalities among the civilians.

Syria Relief and Development (SRD) calls on the US Government, the United Nations and the international community to take action to help gain the necessary access for humanitarian aid and protection of civilians. Idlib is a home to over 3 million people; including 144,323 internally displaced (IDPs) who have been relocated to Idlib governorate from Raqqa, Deir-Ez-Zor, Hama, Aleppo, Damascus, Dara’a and Arsal (Lebanon) since April 2017. Once they arrive, IDPs depend on facilities to help provide them with life-saving services including health care, shelter, water, sanitation, and more. However, with the increase in aerial strikes, many of these facilities (including five belonging to SRD) were forced to suspend operations and aid during the ongoing attacks.