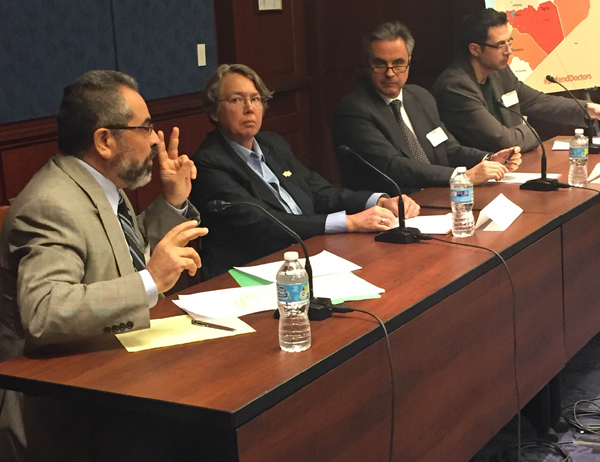 Our founder and president, Dr. Jihad Qaddour, spoke at a panel briefing yesterday on Capitol Hill about the humanitarian crisis in Syria, human rights violations and the targeting of medical personnel and facilities and the role medical practitioners play in the conflict. Qaddour was joined by panelists Widney Brown, Director of Programs at Physicians for Human Rights (PHR), Dr. Majed from the Syrian American Medical Society (SAMS) and Francois Stamm, Head of Regional Delegation at the International Committee for the Red Cross (ICRC).

Qaddour spoke about the need for a relationship and sense of trust that’s built between Syrians on the ground and the international community. He identified the most efficient way to do that as through organizations like SRD that are American organizations and have already built those relationships on the ground and have already gained the trust of local communities.

SRD Grants and Programs Associate Dena Elian attended the briefing which was held just three days before the March 15 four-year anniversary of the crisis. “The briefing drew out the layers and gravity of the humanitarian crisis in Syria. It brought forth the perspective of a major international NGO, the human rights angle, the lens of a Syrian doctor risking his life every day and the vital role of organizations like SRD who are dedicated to helping pave the way for Syria’s future,” said Elian.