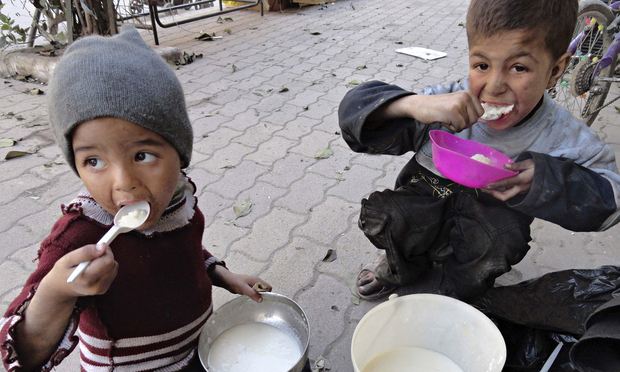 Currently, 18,000 civilians in Yarmouk Refugee Camp in Damascus, Syria are living without adequate access to food and running water as the camp continues to remain under siege. SRD is among a group of nonprofit organizations that sent a letter to UN Special Envoy to Syria Staffan de Mistura to call for an immediate lifting of the siege on Yarmouk for humanitarian aid as well as immediate access to all of Syria’s besieged areas.

We are concerned for the well being of 18,000 civilians in Yarmouk, 3,500 of whom are children. For over two years, the Assad regime has enforced a siege on the district, severely limiting food resources within the camp leading to 200 deaths from starvation. Since September of 2014, the regime cut off access to running water in Yarmouk, forcing civilians to plan their day around collecting water for hygiene, consumption, and agriculture. Overall, 2,000 people have died from conflict-related violence in Yarmouk.

The siege has taken a tremendous physical and emotional toll on residents, who cannot escape the pain of their hunger. Lack of medical supplies coupled with regular aerial bombardments exacerbates the humanitarian crisis. Civilians are caught between the cross-fire of regime soldiers and militant groups. On April 1st, ISIS fighters entered through the siege and are currently battling for control of the area with Aknaf Beit al Maqdis.

As the armed clashes go on, multiple barrel bombs rain down on Yarmouk everyday. These bombs target residential and medical buildings, and have caused a mass internal displacement of 4,000 people within the first week of April. The UNRWA, which has a special mandate to service Palestinian refugees, has been unable to provide humanitarian relief for civilians inside the camp, or allow for safe passage for people wishing to leave. In a heroic effort, Palestinian civil society organizations have stepped up to provide humanitarian services, but are severely limited in resources. International aid actors and civil society workers cannot do their job in Yarmouk so long as the Assad regime continues to enforce the siege.

As UN Special Envoy to Syria, it is your mission to bring an end to all violence and human rights violations within the country and achieve a peaceful resolution for the conflict. This can only happen by placing the physical and emotional well-being of civilians at the center of resolution efforts, which is why it’s necessary to respond to the urgent humanitarian crisis facing civilians in Yarmouk.

As per Security Council resolutions 2139 (2014), 2165 (2014) and 2191 (2014) that call for immediate access to all of Syria’s besieged areas, we are asking you to ensure the immediate lifting of the siege on Yarmouk on humanitarian grounds. In spite of years of grueling violence, the people of Yarmouk have an unyielding will to live and pursue universal joys of life. We must not fail to support them as their brutal siege plays out on the world’s stage.

The Coalition for a Democratic Syria