Yaser’s Diary: A Touch of Color on a Gray Day 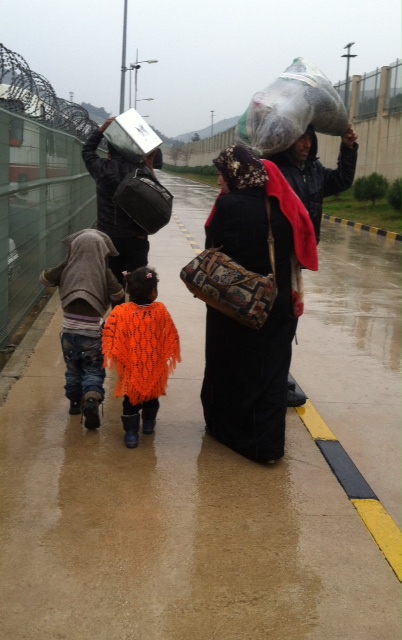 In the last two weeks, I’ve crossed the Cilegozu border point between Turkey and Syria at least eight times to distribute relief items to inhabitants and refugees in cities, villages, and towns across northern Syria.

If I was asked to describe the border using one word, it would be “gray,” which is ironic, considering that prior to the revolution, my experiences traveling between the two countries were always colorful.

Everything is completely colorless now: the border-gate, the wall, the barbed-wire, the rocky hills and even the people who wear mostly gray and black galabyehs–robes.

This particular morning was grayer than ever with all the fog and pouring rain. Still, I was content, because I had finally found a driver brave enough to transport our winter kits to an area I have been trying to reach for a few days.

As I was thinking about this, I noticed the first non-gray spot in the area: a girl of about six years old in an orange shawl.

A woman walking with the girl–her mother, I soon discovered–who was carrying a baby saw me wave at the girl and suddenly tensed. I approached the family with their spot of color to learn more about them.

The family of five–the father, mother, and their three children–had been living in a cave before leaving to seek new shelter. The night before, they had packed up all of their household items and carried them for eight hours in the rainy darkness of night trying to avoid snipers. They had finally found a driver willing to give them a lift to the border. The family was tired and soaked from walking in the rain.

The family had no passports and very little money when they reached the border. It took awhile before they were approved to enter Turkey, a country they knew nothing about except that it is faraj–the light at the end of the tunnel.

The father asked me if 4,300 Syrian liras ($48 USD) were enough to rent a small house for a month in the neighboring city of Reyhanli, Turkey. I was too choked with tears to tell him that a single room goes for at least $250 (USD) per month.

I offered the father some financial support, but he refused to take any money from me. I asked him whether his family had been helped by any people or organizations where he came from. He told me that his family, along with a few other families, had sought refuge in a remote mountainous area where they were isolated and saw nothing at all.

For a moment I felt helpless against the gravity of the situation inside Syria. It often feels like we are doing so little when there is such a great need. Then I remembered something my wife told me: just imagine if no relief work was being done.

I waved good-bye to the little girl in the orange shawl, later regretting that I forgot to even ask her name. But her family will remain etched in my memory as the spot of color on a gray day.