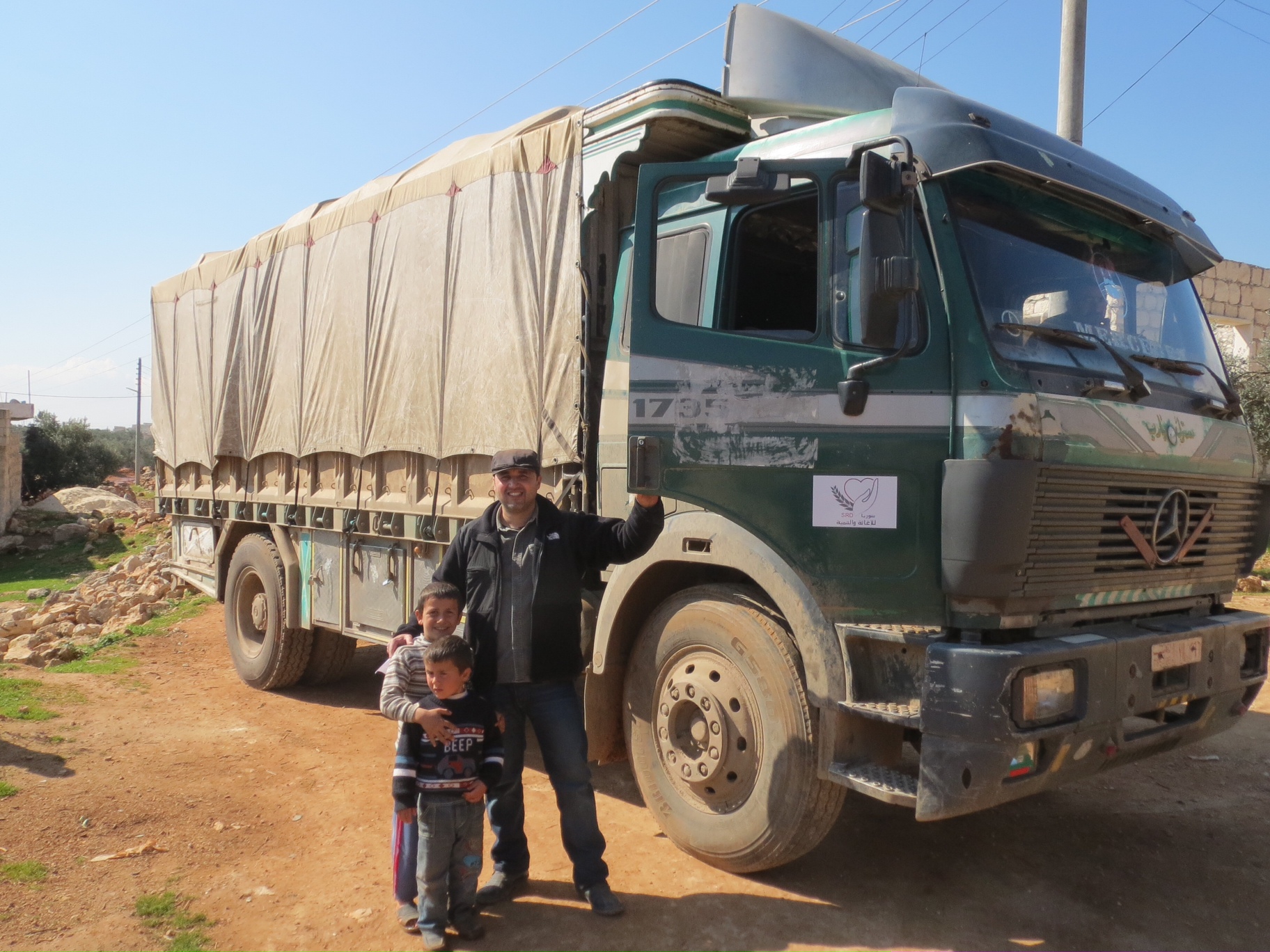 Our truck arrived in Hass early one afternoon after traveling a seemingly endless road. Hass is a small town in the Idlib region of Syria that is now controlled by the Free Syrian Army. It was lunchtime but neither Mustafa, the driver, nor I had any appetite–Mustafa was in a hurry to get back on the road before dark and I felt guilty about taking any time away from our mission: to help our partners distribute a large shipment of clothing, infant formula and other goods that had finally arrived from the U.S. after five months in transit. But now it was here and I was eager to help our partners distribute it.

At the distribution site, Mustafa and I were met by Abu Samer, a well-respected figure in Hass who owns a plastic bag factory. The factory had been sealed off for a year now, but he opened its doors for us to unload the shipment of 263 boxespacked with clothing, mostly for women and children. Abu Samer had a list of Hass families in need and we quickly began stuffing plastic bags with clothing for each family. The long-closed factory became a beehive of activity as Abu Samer, his wife, his two sons, their wives, and a young man from the neighborhood all pitched in to help.

Before dark, we set out to deliver the goods only to realize how our plan had failed to meet the families’ needs: people would open their bags and realize the cherished clothing items were “too little” or “too big” for their own individual family members.

We regrouped at Abu Samer’s house to re-assess our plan. His daughter-in-law, Layla, came up with a brilliant idea: “Why don’t we ask the families to come to the factory< and choose their own items?” Umm Samer and her other daughter-in-law, Maha, thought it was a good idea, but the men were not yet on board.

Since no one had any better ideas, Abu Samer asked us to return to the families’ homes and write out vouchers they could use to “buy” what they needed at the factory the following day. We returned to the homes and knocked at each door, this time asking how many people were in the family and then writing the vouchers accordingly.

By the time we returned to the factory at 11 pm, the women of Abu Samer’s family had strung ropes throughout the factory and were hanging up clothes, grouping them by gender and size. The boring gray abandoned factory was beginning to look as colorful as Souk Al-Hamidiyeh, a renowned market in old Damascus.

We worked to set up the factory under the dim light of a generator; it took until one in the morning to finish. The men were exhausted, but I could see how excited Umm Samer and her daughter-in-laws were.

At 7 am the next morning, a line formed outside the factory, stretching for half a mile. “Abu Samer’s Mall” was a distance for many of the townspeople to travel–and it really felt like a mall, with people admiring the clothes, trying them on, giggling and enjoying themselves.

By the afternoon we were exhausted. Ali, one of the volunteers, grew restless at how much time many of the families were taking in choosing their items. Abu Samer asked Ali, his son Ahmad and I to take a break with him outside and he asked Layla make us some tea. We sat on chairs overlooking the factory, waiting for him to speak.

He looked at the crowd with misty eyes and said, “For the past 20 months all this town had heard were cries for help and wailing over the dead and injured. Three Eids passed and people didn’t shop for their children let alone themselves.” Putting his hand on Ali’s shoulder he looked him in the eye and continued, “I am not going to let anybody ruin their happiness. Let them take their time and let their kids enjoy this.”

Ali stood and kissed Abu Samer’s head, and then mine, and prayed for the people who sent these items that gave his townspeople so much happiness. Abu

Samer then directed us to deliver the precious infant formula and diapers to the households that needed them most. We finished our deliveries at 11 pm and Umm Samer had dinner waiting for us. We ate and recounted endless stories about the makeshift mall’s patrons that day.

Two days after I left, Hass was heavily shelled by regime jets. I watch videos online of children’s bodies dragged from under the rubble and remembered the families I had encountered in the makeshift mall. Filling myself with those happy memories was all I could do to bare the loss that this beautiful town suffered.